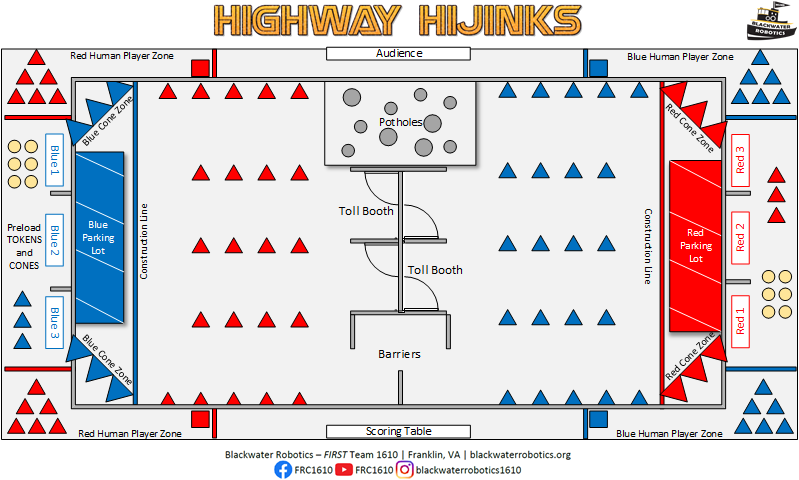 In HIGHWAY HIJINKS, two alliances of three teams each race to complete construction and open the toll booth of a new highway. Each alliance clears Cones from the opposite side of the field and score Cones in their Cone Zone. Alliance colored Toll Booths in the center of the field can be unlocked with Tokens. Potholes and Barriers are alternate, but more dangerous, routes to traverse the field. The end of the match is Rush Hour – robots will rush to the opposite end of the field and park in angled parking spots for additional points.

During the 15 second Autonomous Period, robots are in control. Alliances score points by:

In the final 2 minutes and 15 seconds of the match, drivers take control. Alliances score points by:
Continuing to deposit Tokens to unlock access to the Toll Booth
Retrieving Cones matching their alliance color from the opposite side of the field or Human Players and scoring the Cones in their Cone Zone by placing on the floor or stacking on Pylons

The final 30 seconds of the match is Rush Hour. Teams rush to the opposite side of the field and park in angled parking spaces on a raised platform in front of their opponent’s driver station.

The alliance with the highest score at the end of the match wins.

One Red and one Blue TOLL BOOTH are located side-by-side on the midline of the FIELD, serving as physical barriers when ROBOTS attempt to cross from one side of the FIELD to the other. Each 42” tall TOLL BOOTH has one GATE in the center that is locked at the beginning of the MATCH. The top of each TOLL BOOTH is illuminated with Red or Blue LED lights indicating ALLIANCE ownership. TOLL BOOTH colors are randomized at the beginning of AUTO. Each TOLL BOOTH has a BASKET mounted on each end with the top of the BASKET 36” from the floor. Each BASKET contains a weight sensor. Once the appropriate weight of TOKENS is scored in the BASKETS, the TOLL BOOTH is considered unlocked and the GATE opens for that ALLIANCE to pass through in either direction. If the TOLL BOOTH is not unlocked with TOKENS, it will automatically unlock with 30 seconds remaining in the match.

The TOLL BOOTH is surrounded by two obstacles. On the audience side are POTHOLES on a 2” raised HDPE platform. POTHOLES are cut into the HDPE in various sizes and depths. BARRIERS are on the scoring table side, and consist of three sections of 42” high wall that ROBOTS must navigate through.

The CONE ZONE exists in each corner of the playing field, two zones for each ALLIANCE. Each CONE ZONE contains a row of three PYLONS on top of which red/blue CONES are stacked. PYLONS are standard size (36” tall) orange traffic cones. A tape line designates the edge of the CONE ZONE, 12” out from the row of PYLONS.

ROBOTS will move from their starting position and cross the CONSTRUCTION LINE to score points. They can choose to preload one TOKEN or one CONE. ROBOTS may score additional points by placing a TOKEN in a BASKET on their ALLIANCE’s TOLL BOOTH or scoring their pre-loaded CONE. Additional TOKENs can be retrieved from HUMAN PLAYERS during AUTO.

ROBOTS less than 18” tall can pass under their TOLL BOOTH’s GATE without paying the toll.

ROBOTS can choose to detour around the TOLL BOOTH by utilizing the more dangerous and slower POTHOLES or BARRIERS paths.

The main scoring object in TELEOP is to retrieve ALLIANCE colored CONES from the opposite side of the field, then score them in a CONE ZONE. CONES on the floor of the CONE ZONE are worth minimal points, while CONES stacked on top of PYLONS are worth additional points. Six (6) BONUS CONES per ALLIANCE are randomly placed on the field in place of normal CONES. Stacking six BONUS CONES, one on each PYLON, will award one RANKING POINT.

In the final 30 seconds of the MATCH, RUSH HOUR begins. ROBOTS will traverse the field and park in their opponent’s PARKING LOT. Each PARKING LOT has three angled PARKING SPACES. Points will be awarded for ROBOTS fully supported by the PARKING LOT and additional points for robots fully contained by the vertical volume of their PARKING SPACE.